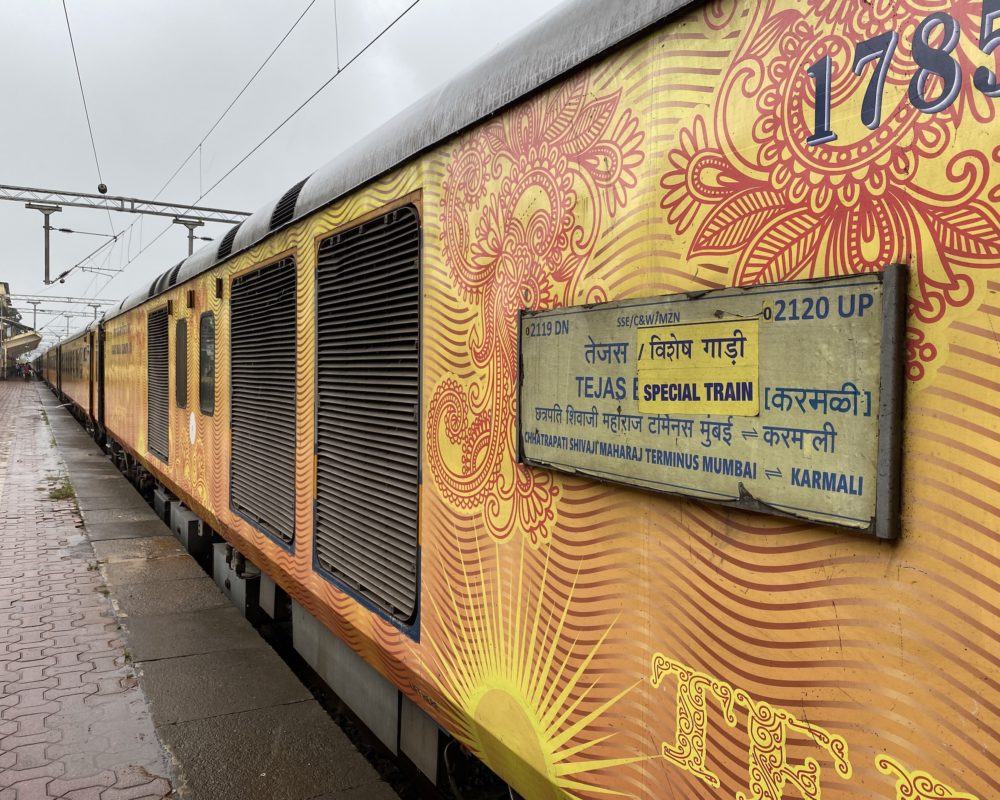 This train is one of the finest offerings of Konkan Railways/Indian Railways. After a bit of research, I came to the conclusion that I had to try it out. Was this one of the best train journeys I have done to date? Find out in this article.

This train is a semi-high speed fully air-conditioned offering from the Indian Railways/Konkan Railways. It runs between Chatrapati Shivaji Maharaj Terminus (CSMT) in Mumbai, and Karmali (KRMI) in Goa on Tuesday, Thursday and Saturday.

It departs from CSMT at 5.50 am and reaches KRMI at 4.00 pm on the same day. This train takes a total travel time of 10 hours and 10 minutes to cover the total distance of 552 km. In doing so, the train stops at Dadar, Thane, Panvel Junction, Chiplun, Ratnagiri, and Kudal.

There are two categories of seats on this train – Executive Chair (EC) and Chair Car (CC). Executive Car is the luxury offering, equivalent to the business class on an airplane, while Chair Car is the economy option.

I finalized my decision to travel to Goa very late. To be precise, it was only four hours before the scheduled departure of the Tejas Special train. I used MakeMyTrip(.)com to book this train journey – I find their platform very user-friendly.

The first step was to finalize the train, luckily Tejas Special had seats available in both the sections – Executive Chair (EC) as well as the Chair Car (CC). I selected the Executive Chair, their luxury offering, and was then taken to the next page where I was required to enter my IRCTC username along with my details (full name, age, and gender).

After that, I had to enter my contact details (email and phone number) and address details. Then there were ‘Additional Preferences’ to choose from, like whether you want to book ‘only if confirm berths are allotted’ and if you would like to take travel ‘insurance for INR 0.49 per person’.

I knew from the availability section that there were seats available so I wasn’t stressing over whether I will get a confirmed seat or not. I did get the travel insurance though, as it barely made any difference. The total cost of the ticket came to INR 2,497.74.

The Chair Car (CC) seat on the other hand was priced at around INR 1,200, almost half the price of the Executive Chair seat.

I reached Chatrapati Shivaji just 10 minutes before the scheduled departure time of 5.50 am, so I had to hurry to the platform. On my way to the train, my shoes kind of gave up on me and I ended up with both the soles coming off.

This was a little shocking because these were Paul & Shark shoes and expected them to do better than this, especially given the high price I had paid for them. Also, I really liked these shoes. I, however, managed to get on my coach E-1 comfortably.

E-1 was the last coach on this train before the generator van, and it was also the first one from where I entered the platform, so that worked in my favor.

I got comfortable in my allotted seat number 25, which was a center seat, so I had a nice table in front of me. While I was checking out the features of my seat, the train moved a little before stopping again. Then finally departing from the station five minutes later, meaning that the departure was already later than the scheduled time.

I found the Executive Chair seat very comfortable, and perfect for this 10-hour long journey. The EC section is in a 2-2 configuration, which makes each seat spacious enough. The seat featured an entertainment screen, reading lights, staff assistance call button, hanging hooks, and the windows featured sliding shades – helpful for when you decided to take a nap.

The seat also featured a three-way adjustable headrest and had a good enough recline. There was also leg rest at the seat, which rose halfway up.

I also checked out the Chair Car (CC) section and the features of the seats there.

The Chair Car section in the next coach was empty, and so I moved temporarily to check out the hard product here. The Chair Car was in a 3-2 configuration, meaning each seat was narrower. There was no adjustable headrest, and although the seats reclined, it was lesser than the EC seat.

There was an entertainment screen (which wasn’t working anywhere on the train), a table, a front pocket to store your belongings, and a bottle holder. Overall, I found this product to be pretty good as well. I could see myself riding this coach comfortably for the entirety of this journey. The EC was luxurious though.

Journey aboard the 02119 KRMI Tejas Spl

After checking out the seats in both compartments, I got back in my seat. By this time the train had already crossed Dadar and Thane, and more people had boarded my coach, unlike while departing from CSMT where I was the only passenger to entrain my coach.

The breakfast was served at 9 am, there were only two options to choose from – Upma and poha. Owing to the Covid regulations, the food being served for breakfast was instantly prepared using hot water. I chose to go with Upma, and surprisingly it wasn’t bad.

There was railway staff going through the coach at regular intervals, selling snacks, water, soft drinks, etc. I got myself a couple of bottles of water after breakfast and prepared to get a nap before taking lunch. I had looked forward to getting some sleep on this journey, as I couldn’t get much rest the night before.

I managed to take a nap for an hour or so before the staff members arrived to take lunch orders at 11 am. There were two options – Rajma & rice, and dal tadka with rice. These dishes were properly cooked in the kitchen and served in sealed packaging (due to Covid regulations).

I chose to go ahead with dal tadka with rice. The staff member took down my seat number and asked me when would I like my lunch to be served, to which I told him to serve it at whichever is their normal time of lunch service.

During this time, the train arrived at Chiplun and the halt here was approximately 5 minutes. I got down to get some fresh air and couldn’t believe my eyes when I saw the beautiful backdrop of lush green hills at the train station. Check out my detailed Vlog of this journey to see the beauty of Chiplun.

I also got down at the next stop, which was Ratnagiri station, there wasn’t much of a view from there, although the weather was really pleasant. I would also like to mention that this belt that the train was moving through between Mumbai and Goa is known as the Konkan region, and this region witnesses a lot of rainfall. We saw regular showers on this route throughout the journey.

The lunch was served at 12 pm and it was really good. I actually enjoyed this food very much. After the meal, I got comfortable in my seat and watched the breathtakingly beautiful views that this train ride had to offer.

There were numerous tunnels that this train passed through and most of them had only single tracks, so the train had to make several unscheduled stops in the case where there was another train coming from the other side. This caused the train to fall almost an hour behind schedule.

Calling an early end to the journey / Thivim

Just like many other unscheduled stops, the train stopped at Thivim station in Goa. Since I was staying at Morjim for the first two nights, this station was more conveniently located for me than Karmali – the destination of this journey.

The train had reached Thivim sharp at 4 pm, which was the scheduled time of arrival at Karmali. On the positive side, this also showed that the train had made up for some lost time at least, as Karmali was approximately only another half an hour from here.

I weighed out my options and decided to get off at Thivim itself, as this was saving me time as well as money that I would have spent on taxi for the added distance. Plus, the rest of the journey was going to be the same, so there was no compromise on experience either.

The exit at Thivim station was at the other side from the one I had gotten down at. I took the bridge to get across, and the view of the station from on top of the bridge was simply amazing too.

There were multiple options for taxis right outside the station, first one to offer me a ride was a motorbike taxi. Considering I was traveling with just one small suitcase and a backpack, I took him up on the offer and negotiated the price down to INR 600.

The ride was quite an experience. It was fun and I reached my resort in Morjim in around 40 minutes. Fortunately, it didn’t rain while I was on my way, so I along with my luggage reached my room nice and dry.

I am glad I chose the 02119 KRMI Tejas Spl, the hard product in the Executive Chair (EC) was of high standards and it ensured that I had a comfortable ride. The staff members were polite and the service was up to the mark.

I really enjoyed my lunch on this train, as it exceeded my expectations by quite a distance. The only issue I faced was with the breakfast service, because of the nature of its preparation, instant ready food. It was also understandable because this was only due to Covid19.

I would one hundred percent recommend this product to anyone who is traveling from Mumbai to Goa. It was a great experience. To top it all off, the beautiful scenery along the Konkan region was the icing on the cake. This has got to be one of the best train journeys I have ever had.

Which train do you prefer to travel to Goa? How has your experience been?

A globetrotter and a finance enthusiast with an undying love for numbers, he splits his time between Mumbai and Dubai. Saadaan manages our operations in India. To get in touch, email saadaan(at)takeoffwithguru.com or interact with him on FlyerTalk – username xDan.