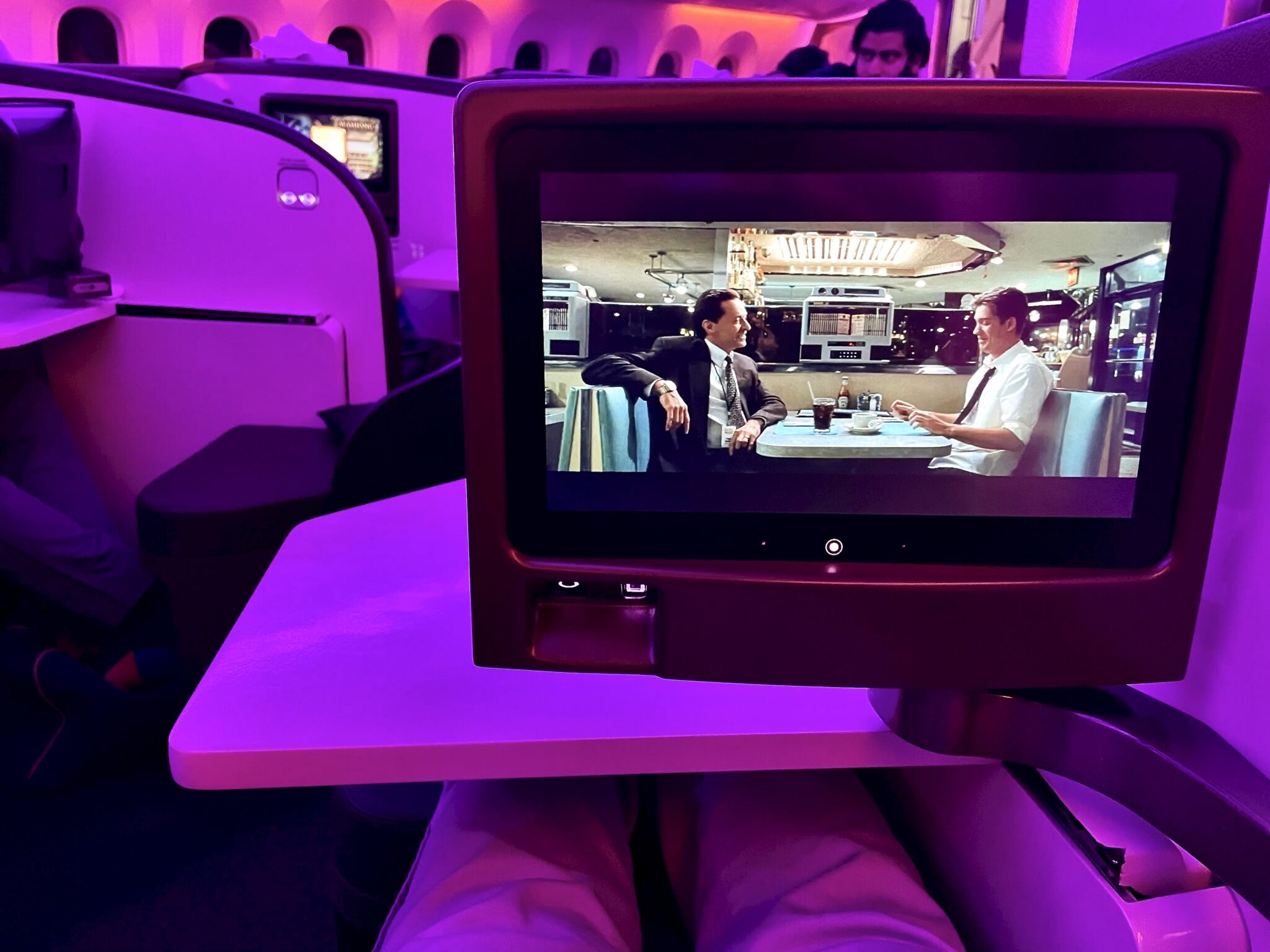 I’m just back from a three-week trip to India – my first long-haul flight for a year! I scored a great deal with Virgin Atlantic, flying “Upper Class” (business class) between London and Delhi for just over £780 return.

I’ll follow up with a more detailed review of the return leg (which was a daytime flight), but for now I wanted to share my thoughts on the outbound, overnight flight from London Heathrow to Delhi Indira Gandhi International Airport.

Having been grounded for so long, I was pretty excited to experience long-haul flying again, and intrigued to see what Virgin Atlantic’s onboard service would be like.

Boarding began at 8.45pm, 45 minutes before our scheduled departure time of 9.30pm and, with priority boarding, it didn’t take more than a couple of minutes to get on the Virgin Atlantic Boeing 787 (which I’ve flown many times, pre-coronavirus).

While boarding, I was reminded to keep my mask over my nose and given a ”welcome back” from the flight manager (presumably because I recently took advantage of a status match that Virgin was offering to British Airways frequent flyers, giving me instant gold status).

Business class, known as Upper Class on Virgin Atlantic, was almost full and I was initially a little concerned about how much sleep I’d get, as there were quite a few kids in the cabin (though in the end, there was no need to worry).

I took my seat in 11K – a “window” seat on the right hand side of the aircraft. The 787 features Virgin’s legacy business class seats, which have a number of issues, including the fact that the window seats actually face away from the window, and that you need to ask the crew to turn your seat into a flat-bed seat.

The seat offers very little flexibility in terms of recline – it’s essentially either a seat, or a flat bed.

I’ve always thought that I preferred A seats, which are separated by the other two rows by a diving wall, but I actually enjoyed my seat and the cabin somehow seemed more open and airy.

It was pretty hot on board but, thankfully, there were air nozzles and I was really happy to see the crew serving pre-departure champagne – especially after having no alcohol in the lounge.

There was a good atmosphere on board – and quite a few passengers seemed happy to be drinking their bubbly (a brand that I’d never heard of before, Ayala, which was pretty decent) while we were waiting for departure.

Various announcements were made to reassure us that Virgin Atlantic was doing all it could to protect passengers, including cleaning the aircraft with “hospital grade” products. We were told that the toilets would be cleaned throughout the flight, but were asked to let the crew know “if there’s anything we’ve missed”.

Finally, passengers were warned that repeated refusal to wear a mask onboard may result in being banned from future travel.

Next up, the captain came on to inform us our flight would take seven hours and 41 minutes, and we were soon on our way to Delhi…

As I settled into the flight, I began checking out Virgin Atlantic’s PPE pack, which carried the tag line “You’re in Safe Hands”. Inside were masks, two wipes and two sachets of hand gel. I must admit that I expected hand sanitiser gel to be more prominently displayed onboard, perhaps with some of the big dispensers like the ones you’ll find in a shopping mall etc.

The usual Virgin amenity kit which goes by the name of the ‘goodie bag’ was waiting at the seat, but I’m not the biggest fan, possibly because it’s made from recyclable paper. The intention is good, but I think Virgin should up its game by providing a more luxurious giveaway.

No pyjamas were handed out, which was surprising on an overnight flight (presumably these have been suspended during covid).

I checked out the entertainment and the unbranded headphones were okay, though as usual I struggled finding something I wanted to watch. I put on a movie called Bad Education while the crew served pre-dinner refreshments.

At this point some of the crew were wearing what can only be described as luminous blue space suits, which was mildly off-putting, but these seemed to disappear later in the flight.

I had a glass of pinot noir and was handed a packet of uninspiring pretzel thins (which have replaced the usual open bowls of potato crisps).

There are no paper menus at the moment, but for dinner there was a choice of butter chicken with rice, salmon with couscous and artichoke tortellini. I asked to be woken for breakfast (something I’d later regret).

When the meal turned up, I was asked if I wanted cheese OR dessert and for a moment I thought I was flying with British Airways (who are always stingy when it comes to puddings!).

Of course I wanted both, and the lady looking after me said she’d see what she could do.

The mozzarella and tomato starter was good, but really needed a dressing so I tried to jazz it up with salt and pepper.

The butter chicken main course was also good, with a slight hint of spice. The bhindi (okra) tasted fresh and still had some bite.

There was a really nice lemon posset style pudding with desiccated coconut for dessert, and I managed to get my cheese plate, too. I rounded off the meal with a hot chocolate.

As I find with most airlines, the catering from London was very good. The food was tasty, just the right quantity and the meal wasn’t too salty (which happens with Virgin Atlantic).

I watched the movie for a bit but started dozing off so asked for the bed to be made. The lady said sure, and that she’d be back after putting some fresh gloves on.

As I got up to use the bathroom, I noticed that individual hand gel sachets were available in a large bowl at the onboard bar – though the bar itself didn’t get used, as far as I could see.

Toilets, however, were only available at the rear – and one was reserved for crew use. This meant there was often a queue for the lavs, and Upper Class passengers ended up sharing their loos with passengers from the Premium cabin.

I thought this was poor –  Upper Class passengers pay a lot more to fly up front (except for those with £780 tickets ????) and a dedicated loo doesn’t seem too much to ask. The bathrooms remained acceptably clean and were stocked with Ren products, which smell great.

I slept comfortably for about four hours and was woken by the crew for breakfast, which was served about an hour-and-a-half before landing. I was surprised how bad it was – there were powdery eggs, watery mushrooms and an anaemic sausage.

In retrospect, I definitely wished I’d stayed asleep and skipped breakfast. The mountain views en route to Delhi did make up for it a bit, though…

Once the crew cleared away the breakfast items, there was time to stretch my legs and check out the cabin in daylight. Soon enough, we were on the ground in New Delhi.

On landing, Virgin Atlantic gave a PA with out of-date-information about the procedures in place for overseas arrivals. They informed passengers that they’d have to wait in the airport for around ten hours while their covid results were being prepared, and that they’d have to home quarantine for 14 days – none of which is true anymore…

It felt both stressful (just a little) and exciting to be travelling long haul after a year, but overall Virgin Atlantic did a solid job.

Mask wearing was, on the whole, complied with, and Virgin Atlantic worked hard to make passengers feel safe about flying – though I would definitely feel more reassured if large hand sanitiser dispensers were available in the cabin.

The last thing to add is that, unlike on previous Virgin flights I’ve taken to India, there were no crew announcements given in Hindi on this flight.

Have you travelled long-haul recently? What was your experience?

When he’s not at home in the UK, Luke can be found travelling the world for work and pleasure, always searching for the best deals using miles or money. His favourite offers, reviews and travel updates can be found right here at takeoffwithguru.com

Qatar Airways’ free flights for medics; Malaysia’s famous Eastern & Oriental hotel to reopen; and the man ‘stuck’ in Delhi airport for over 50 days